In 2008 the Spanish writer Albert Espinosa published The yellow world, a book that the author himself has said is not self-help. It is a long testimonial about the difficult experience and learning caused by a ten-year fight against cancer. In this way, the author constructs a narrative in which he identifies “other yellows”, with a close and very pleasant style for the reader.

Thus, the idea of ​​a totally yellow life, from the outset, is a somewhat striking element. I mean, why that particular color? In any case, Espinosa exposes a perspective capable of breaking with the traditional stigmas of the disease. Where - despite the transience of human existence - it is important to immerse oneself in the present, without fear of death.

About the author, Albert Espinosa

This writer of film scripts, author of dramatic pieces, actor and Spanish novelist, was born in Barcelona on November 5, 1973. Although he was trained as an industrial engineer, he dedicated his life to the arts, achieving quite a bit of notoriety in the cinema and on stage..

Attitude in the face of adversity

Espinosa's life changed radically after the diagnosis of an osteosarcoma in one leg at the age of 13. This condition affected him for just over a decade, even so, he entered the Polytechnic University of Catalonia at the age of 19. Meanwhile - due to cancer metastases - he suffered the amputation of a leg plus the removal of a lung and part of the liver.

Espinosa's health circumstances later served as a reason for the creation of literary pieces for theater or television.. Also, while studying engineering (still battling cancer), he was a member of a theater group. Hence, his first expressions as a writer come from, inspired by his own life above all.

At first, Espinosa wrote theater scripts. Later, participated as an actor in The Pelones, a dramatic piece of his authorship inspired by his experience with cancer. In the same way, that title served as the name for a theater company that he founded together with his friends.

At the age of 24, he began his path on television, specifically as a scriptwriter in various programs. Half a decade later, the Catalan writer managed to become known when he fulfilled the work of screenwriter for the film 4th floor (2003). From this film, Espinosa established himself on the big screen and received awards as a theatrical scriptwriter and playwright during the following years.

The literary aspect of your life

In the mid-2000s, Albert Espinosa was already recognized in the Spanish artistic world thanks to his theatrical, television and cinematographic works, but he wanted something more. Then, in 2008 he released his first novel, The yellow world. In the following years has not stopped publishing books, among which, include:

Analysis of the work

Why The yellow world? (The great reason)

This book is usually classified as Self Help due to the message proclaimed in the text. Since the core of the text revolves around the value of friendship, living in the present, seeing the positive side of each reality, no matter how bad the situation may paint ... To do this, Espinosa, from a rather intimate point of view, build an original way of living and understanding each other's existence.

Therefore, it is not a painful story (as one might think of a cancer patient), because the argument focuses on the will to excel of each human being. In that way, Espinosa he manages to show the positive side of his experience —although no less difficult— without using ornaments that detract from the realism of the story. 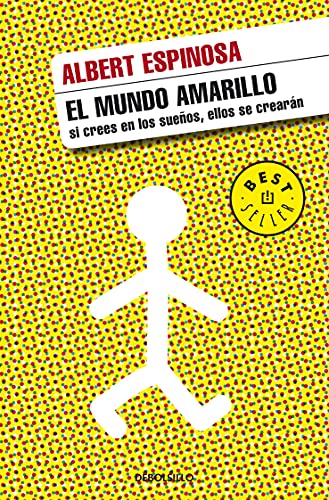 The author's invitation to his readers

At the end of the narration, the viewer is asked the following question: do you want to turn yellow? Although it should be clarified that "yellow" it is much more than an attitude to misfortune. Actually that color It also represents a warm, bright place, where every setback is an opportunity to learn, grow and advance with more force.

Everything is temporary, even sickness

Illness symbolizes a non-permanent circumstance (just like most things and people in life). However, this does not imply ignoring the consequences of a very harsh medical condition, much less putting the label "ephemeral" on everything.. It should be remembered that the protagonist of the story loses part of a limb and even some organs.

The validity of the book

The 2020s will go down in history as the lustrum of the emergence of Covid-19. This worldwide epidemic can be taken as a reminder to humanity: You have to value the present and show affection to loved ones. Accordingly, it is impossible to ignore Espinosa's point of view on issues related to human relations in The yellow world.

Albert Espinosa decides to renew his vision of the world from the moment in which his health condition is explained to him. Hence, the proposal to create a whole world that he calls yellow. In consecuense, the narrator redefines his beliefs and the path traced up to that moment.

At that moment, when the protagonist manages to recognize himself with his strengths and weaknesses, he can transform his conception of the universe. In addition, the result of that evolution triggered from within the person culminates with the understanding of 23 neuralgic discoveries. Here are a few:

The will is not negotiated

The body of the text is dominated by an autobiographical anecdotal narrative of a man with the ability to contain his complaints or not to show sadness while describing his condition. Thus, Another significant revelation is the non-negotiable character of strengthening the will. Eventually, Espinosa explains that only by coping with cancer was he able to make the discoveries set out.

Additionally, the Spanish author refers to the yellow ones as marked individuals that help to know the marks of each person who socializes with them. Finally, the text lacks a closure as such. In that final part, the narrator proposes to his readers a new beginning in life, without labels, with an endless desire to live it.