Among the great works of Spanish literature, El Cantar del Mio Cid occupies a fairly high position, since it is one of the greatest songs of deed preserved from the Middle Ages. Specifically, we are talking about the first extensive poetic work of literature in Spain, and also the only one that is almost completely preserved, because it is missing the first sheet of the original and two interiors of the codex.

If you want to know more about El cantar del Mio Cid, such as its history, characteristics, characters ... or knowing a fragment, today we will satisfy your curiosity.

El Cantar de Mío Cid is classified as a deed song. In fact, it is the oldest deed song that is preserved almost in its entirety and it tells the story of a character during the reconquest of the Peninsula. We refer to Rodrigo Díaz de Vivar, since he fell from grace with Alfonso VI until his death.

Despite the fact that the Cantar de Mío Cid is anonymous, and a great work of Spanish literature in the Romance language, the truth is that some specialists attribute it to Per Abbat, a minstrel or copyist who wrote it in 1207 (although the Manuscript that is preserved, that of Per Abbat, is dated 1307).

Currently, the original is in the National Library (They have it since 1960). Its state of conservation is quite "delicate", because in many leaves there are dark brown spots due to the reagents to which it has been subjected. In addition, as we said before, there are several gaps, specifically the first page and two inside pages.

The song of Mio Cid is divided into three parts:

Unfortunately, we do not know who the author of El cantar del Mio Cid was. Hence, it is said to be anonymous. Although we have commented before that it can be attributed by some to the minstrel Per Abbat. Now, according to a researcher, Dolores Oliver Perez, a professor at the University of Valladolid, the author could be Abu I-Walid al Waqqashi, a famous Arab poet and jurist.

According to the research he has carried out, this poet and jurist wrote it in the year 1095 in Valencia (since he was settled in that city at the time of Rodrigo Díaz de Vivar).

The theories on which it is based are two:

For sure we can neither affirm nor deny. In fact, nothing else has come to light about it, but it does raise the question of knowing if he really may have been the author of this deed song.

What this researcher does make clear is that this chant of deed served more as a political propaganda poem and that it was not only known in the Romance language, but also in Arabic.

All the characters that are part of El cantar del Mio Cid have one characteristic in common: they are real people. In fact, Rodrigo Díaz de Vivar, Alfonso VI, García Ordóñez, Yúsuf ibn Tasufin, Jimena Díaz and many, many more existed in real life. Now, there are some that raise doubts (because it is not known if they existed under another name or were created by the author), and others that have been directly considered fictitious.

You can even find characters that are real but have the wrong name, for example Elvira and Sol, the daughters of El Cid, who were actually called Cristina and María.

The most important of this song are the following:

To finish, we want to leave you a fragment of El cantar de Mio Cid below so that you know what it is like. But the best thing would be that give it a chance since it is one of the best Spanish deeds of the Middle Ages (and one of the best classic works of Spanish literature). 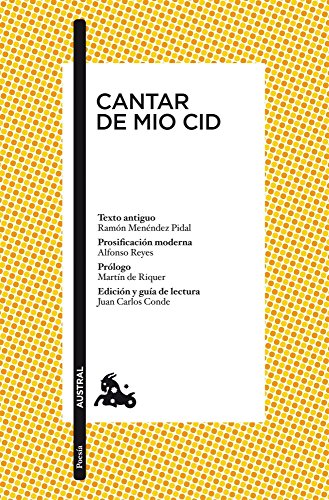 112 Let go of the Cid's lion. Fear of the infants of Carrión. The Cid tames the lion. Shame of infants

El Cid was with his family in Valencia the greatest

and with him both his sons-in-law, the infants of Carrión.

Lying on a bench the Campeador slept,

now you will see what a bad surprise happened to them.

He has escaped from his cage, and the lion was loose,

When he heard it from the court, a great horror spread.

The people of the Campeador embrace their cloaks

and surround the seat protecting their lord.

But Fernando González, the infant of Carrión,

he does not find where to go, everything closed he found,

he got under the bench, so great was his terror.

The other, Diego González, escaped through the door

shouting with greats: «I will not see Carrión again.

«Behind a thick beam he got in with great fear

and from there he removed all dirty tunic and cloak.

and sees his seat surrounded by so many men.

What is this, say, mesnadas? What are you doing around here? "

"A great fright has given us, honorable sir, the lion."

Mío Cid gets up and quickly got up,

and without taking off his cloak, he goes towards the lion:

When the beast sees him a lot, he is scared,

his head lowered before the Cid, his face fell on the ground.

The Campeador then took him by the neck,

like someone who carries a horse in a cage put it.

They all marveled at that case of the lion

and the group of knights to court turned.

Mío Cid asks about his sons-in-law and did not find them,

Although he is calling them, not a voice responds.

When they finally found them, their faces are colorless

so much joke and so much laughter never seen in court,

Ashamed were the infants of Carrión,

They had great regret about what happened to them.