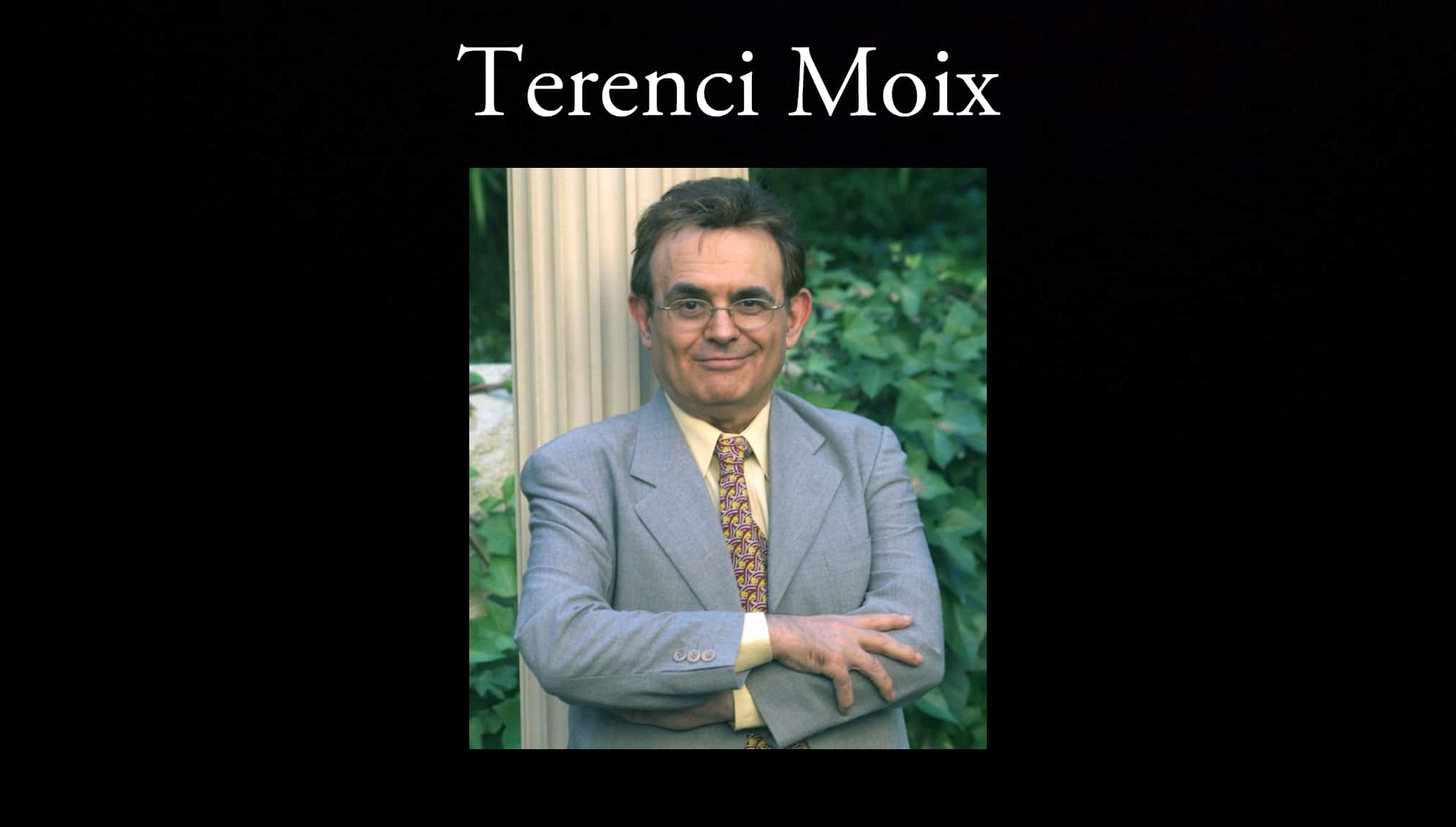 Terenci Moix is ​​the pseudonym under which the famous novelist and essayist of Spanish origin Ramón Moix Meseguer was known (January 05, 1946 - April 02, 2003). His remarkable career in modern Castilian literature was due to his flexibility to address different topics with different styles and literary genres.

In addition to being a notable writer, he also had a television career and an important position as an advocate for the rights of the homosexual community. At present, there are two prestigious literary awards established in his honor for having been a key piece in the constitution of homosexual literature in Spain.

Terenci Moix, whose first name is Ramón Moix Meseguer, was born on January 5, 1946 in Barcelona, ​​Spain. She grew up with her younger sister Ana María Moix - who was later a renowned Spanish poet, translator and editor - in a family in the Raval neighborhood of Barcelona.

Through an interview for the newspaper El País On February 14, 2002, he commented on his studies as follows: “I studied at the Piarists, that is… with priests! He was a lousy student, but funny ”. Yet despite its grace, Moix spent most of his adolescence mired in loneliness.

A loneliness that he only managed to lessen with his assiduous fascination for the cinema. At the end of the educational stage with the ecclesiastical union, he continued to complete his academic training. He studied commerce, drama, took classes in shorthand and topographic drawing. Determining in this way, the course of his life and his professional career.

Before his beginnings in the literary world and thanks to his extensive curriculum, Ramón Moix Meseguer held different jobs. He came to occupy a position as an administrative staff, was in book sales and also served as a literary consultant. He also collaborated in magazines and newspapers such as, for example, New Frames, Tele-Express, Destination, Tele-Estel or El País.

However, His talent and great determination led him years later to discover his facet as a Catalan author, playwright and eventually translator and storyteller. In the time of 1988 and 1989 Terenci Moix made a leap to the small screens of all Spain, as a television presenter.

Programs like Terenci a la fresco o More stars than in the sky —Interview program for Hollywood personalities— that were broadcast on channel 1 of TVE, they catapulted him to television fame.

Moix's great passions have always been movies and travel. In 1962 he traveled to Paris and by the end of the sixties, he had already known a large part of Europe and Egypt. The landscapes, history and culture of this last destination were one of its greatest muses. He demonstrates this on several occasions in works such as: Do not say it was a dream (1986) y The wound of the sphinx (1991).

Terenci's charm for Egyptian civilization dates back to her childhood, when through the cinema he managed to perceive images of ancient Egypt. Those landscapes with history gave him a deep interest, which he professed through his literary works.

Such was his devotion to this nation, that requested as a last will before leaving the earthly plane the dispersion of a part of his ashes in the bay of Alexandria. His wish was respected and fulfilled after his death. After that, all his literary legacy rests in the library of this historic city.

The axis of homosexuality

Not only the fantasy genre and Egyptian civilization were the novelist's visible signature. His work also revolved around a third theme: male homosexuality. Moix never conceived of separating his public life from his private life, the two went hand in hand. For this reason, he was always openly a member of the gay community.

His love life was so open to the public, that he became a defender of social discussions allusive to sexuality, as well as he was against movements that he considered homophobic. He had a love affair with the Spanish actor Enric Majo, which he ended after 14 years.

Analysis of his works

Like all writers, Moix followed different currents throughout his life. As he gained personal experiences, his work evolved and took new directions. However, there is no doubt that the literary style of this author points mainly towards a passion for culture and history.

Cities such as Mexico, Italy, Egypt or Greece gave this author the inspiration for the creation of a literary portfolio on travel. Also, a set of titles where Greco-Roman mythology and ancient Egypt prevail.

As a true Spaniard, allowed deep into his works to observe Catalan culture, the Franco period, sexuality and religious education, combining in them the wealth of Catalan and Spanish. Of course, this mixture of languages ​​positioned him at the literary peak as one of the most valuable authors in Spanish literature.

Ray Sorel and the early works

Like Terenci Moix, Ray Sorel was the teenage nickname by which he called himself Moix Meseguer. By 1963, and at only seventeen years of age, Sorel was fascinated by crime writing. Therefore, during that year he published what would be his first two works in the crime novel genre: I will kiss your corpse y They killed a blonde.

After his publications in 1963, Moix conquered the narrative of the Spanish language with the following titles written in Catalan: The tower of capital vices (1968) Waves on a desert rock (1969), The day Marilyn died (1970) Sentimental trip to Egypt (1970) Male world (1971) y The uncreated conscience of the race (1976).

This era was a kind of initiation as a respected author in the literary industry. From there, she began to use the pseudonym by which she is best known: Terenci Moix. Little by little his works leaned more to the history and culture of the ancient peoples.

The era of the 80's consolidated Terenci Moix among the best authors in Spain. He also became famous for becoming one of the first to write so openly about homosexuality in such a tough time for the gay community. By 1982 it ended Our virgin of martyrs, a work initially written in the Spanish language. In 1983 he published Terenci of the Nile, and then, in 1984, he wrote Love, Alfred!

But it was not until 1986 that a work called Do not say it was a dream, granted him fame throughout the Spanish community. He ended the eighties by publishing the title The dream of Alexandria (1988).

The 90s: hits and trilogies

To close with a flourish its current of the subgenus of historical novel, Moix published the following titles: The wound of the sphinx (1991) Venus bonaparte (1994) y The bitter gift of beauty (1996). During the 90's he also wrote The sex of angels (1992), a work that caused a sensation among the reading public and with which it won multiple awards.

Terenci began and ended the 90s with great literary creations. It can be said that it was the most productive time of the authorWell, he did not stop releasing books year after year. At the same time that he published, he also devised other projects, such as his two trilogies: Straw weight y Esperpentos of Spain at the end of the millennium.

The sex of angels.

The first is an autobiographical work where Moix jokingly recounts his childhood in three volumes: The cinema on Saturdays (1990), Peter Pan's kiss (1993) y Stranger in paradise (1998). The second is a narrative trilogy about Spanish society, where sarcasm and the author's opinion are included. It is made up of the following titles: Atrascan claws (1991) Very woman (1995) y Cool and famous (2000).

The new millennium, last work and its death

With the arrival of the new millennium, the famous writer revealed what would be his last literary work written while alive: The blind harpist (2002). From there he began to fight over the vicissitudes of his health. Moix, a chain smoker for 40 years, was severely affected by pulmonary emphysema.

This condition, later, on April 2, 2003, caused his death. He left the earthly plane at home with his two widows: his sister Ana María Moix and his secretary and faithful friend Inés González.

Terenci Moix also enjoyed writing essays from the first person. In addition to narrative works, this genre became the means by which he allowed himself to flow and shared another of his great passions: cinema. From its beginnings until its last days, it was linked to this type of literary production. In fact, the last title he wrote on his deathbed and later became his posthumous work, My immortals, 60s (2003), is an essay that is part of a series of works —20, 30 and 40— on Hollywood authors of the time.