Waiting for Godot (1948) is a play of the absurd theater written by the Irishman Samuel Beckett. Among all the wide repertoire of the author, this "Tragicomedy in two acts" —as it was subtitled— is the text with the greatest recognition worldwide. It is worth noting that it was the piece that formally introduced Beckett into the theatrical universe, and it earned him the 1969 Nobel Prize for Literature.

An interesting fact is that Beckett - a passionate linguist and philologist - made use of the French language to write this work. Not in vain the publication of the title It was published under the French-speaking imprint Les Éditions de Minuit, four years after it was written (1952). Waiting for Godot premiered on stage on January 5, 1953, in Paris.

Summary of the work

Beckett divided the work in a simple way: in two acts.

In this part, the plot shows Vladimir and Estragon arriving at a stage composed by «A path in the field. A tree. —These elements are maintained throughout the work— One afternoon. " The characters dress scruffy and unkempt, which makes it infer that they may be homeless people, since nothing concrete is known about them. Where they come from, what happened in their past and why they dress like this is a total mystery.

Godot: the reason for the wait

What is really known, and the work is responsible for making it known very well, is that they wait for a certain "Godot". Who is it? Nobody knowsHowever, the text endows this enigmatic character with the power to remedy the hardships of those who await him. 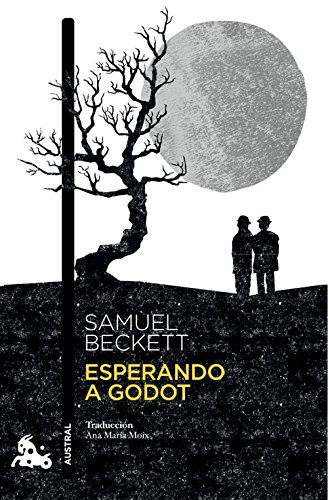 The arrival of Pozzo and Lucky

While they wait for the one who does not arrive, Didi and Gogo - as the protagonists are also known - dialogue after dialogue wander in nonsense and drown in the nothingness of "being". After a while, Pozzo - owner and lord of the place they walk, according to him - and his servant Lucky join the wait.

Pozzo is drawn as the typical wealthy braggart. Upon arrival, he emphasizes his power and tries to exude self-control and confidence. However, as time burns in gossip, it becomes more evident that - like the rest of the characters - the millionaire man is mired in the same dilemma: he does not know the why or why of his existence. Lucky, on the other hand, he is a submissive and dependent being, a slave.

A discouraging message that lengthens the wait

When the day is about to end with no indication that Godot will arrive, something unexpected happens: a child appears. This one gets closer to where Pozzo, Lucky, Gogo and Didi are wandering y informs them thatyes alright Godot is not to come, It is very probable make an appearance next day.

Vladimir and Estragon, After that news, they agree to return in the morning. They do not give up on their plan: they need, at all costs, to meet Godot.

Just as it was said, the same scenario remains. The tree, with its gloomy branches, tempts deep down so that it can be used and put an end to boredom and routine. Didi and Gogo return to that place and repeat their ravings. However, something different happens compared to the previous day, and that is that they begin to notice that there was a yesterday, as the signs that they were there are evident.

You can talk so of a temporary consciousness, even though, practically, everything is repeated; a kind of "Groundhog Day."

A comeback with drastic changes

Lucky and his lord return, however, they are in a very different situation. The servant is now mute, and Pozzo suffers from blindness. Under this panorama of radical changes, the hope of arrival persists, and with it the aimless, absurd dialogues, the picture of the unreason of life.

Just like the day before, the little messenger returns. However, when questioned by Didi and Gogo, the child denies having been with them yesterday. What yes repeat again is the same news: Godot will not come today, but it is possible that tomorrow he will.

Characters they see each other again, and between disappointment and regret, They agree to return the next day. The lonely tree remains in place as a symbol of suicide as a way out; Vladimir and Estragon see it and think about it, but they wait to see what “tomorrow” will bring.

In this manner the work culminates, giving way to what can be a loop, which is nothing more than the day after day of man and what in his full exercise of consciousness he calls "life."

Analysis of Waiting for Gogdot

Waiting for Godot, in itself, it is a redundancy that draws us what is the day to day of man. The normal in the two acts of the text —Except for one or another occasional change— is continuous repetition that does nothing more than show the irremediable walk of each being, step by step, to his grave.

The mastery of simplicity

It is in the simplicity of the work, although it seems cliché, where his mastery lies, where his wealth lies: a painting on the boards that portrays the unreason that surrounds man.

Although Godot - the long-awaited, the long-awaited one - never appears, his non-presence lends itself to a glimpse of the tragedy of the absurdity of human existence. The time on stage receives its reason with actions that, although they seem irrational, would be neither better nor worse than others, because the one who is expected, in the same way, will not come.

Whatever happens, nothing will change the fate of men

In the play it is the same to laugh or cry, breathe or not, watch the afternoon die or the tree dry up, or become one with the tree and the landscape. AND none of that will change the unique destiny: the arrival of non-existence.

Although throughout the years there have been those who claim that Godot is God himself, Beckett denied such reasoning. Well, although they associate it in essence with man's continuous waiting for divinity in different cultures, using the simple coincidence with the Anglo word God, the truth is that the author indicated that the name came from the francophone voice godillot, that is: "boot", in Spanish. Therefore, what did Didi and Gogo expect? For nothing, man's hope is devoted to uncertainty.

As well there have been those who have associated the messenger of Godot with the messiah of the Judeo-Christian culture, and there is logic there. But taking into account what was stated by the author, this theory is also discarded.

The end could not be more in harmony with the rest of what was raised in the work, certainly. So you go back to the beginning, yet you gain the awareness that you are, that there was a waiting yesterday, as or more bloody than today, but no less than tomorrow. And the one who says that he has to come denies that he said he said it yesterday, but promises that it may happen tomorrow ... and so on, until the last breath.

Comments from specialized critics on Waiting for Godot

Curiosities of Waiting for Godot

“It's funny, he specifies that Vladimir and Estragon wear bowler hats and that is why in all the staging they always wear bowler hats. I was resisting. The fact is that I tried caps and other types of hats, but they did not work. Until I ordered a pair of bowlers and, of course, they had to wear bowlers. The bowler hat is Chaplin, or in Spain, Coll. They provoke a lot of referrals. It was a humbling experience for me ”.

Quotes of Waiting for Godot