Isotype of the Virtual Cervantes Library.

The Miguel de Cervantes Virtual Library is a web portal of Spanish origin that collects writings from the Hispanic community. In addition, it has micro libraries, which are run by intellectuals from all over the world. The current director of the library is the author Mario Vargas Llosa.

The service that Cervantes Virtual offers is quite complete, since provides many works in PDF format that can be downloaded and read from any device. On the other hand, the page has an email address where you can send questions or suggestions.

The University of Alicante created this project at the end of the 1999th century, in XNUMX, with the monetary support of the Marcelino Botín Foundation and the Spanish bank Santander. The idea began to consolidate a year before its foundation, at which time it was presented as an online book space.

Andrés Pedreño Muñoz was the person who devised this cultural space, Taking advantage of the fact that for that date he served as rector of the University of Alicante. Its inspiration came from some existing projects, such as: several universities in the United States had already launched their own digital libraries.

The internet was a new alternative to keep records during the time the Biblioteca Cervantes was founded. The main goal of the creators of this portal was to expand the Hispanic cultureDoing it on a network that was accessible worldwide was the best option and for this reason it managed to become a digital medium full of valuable information.

Although the Miguel de Cervantes Virtual Library mostly has literary works, it also offers audiovisual materials. The page provides information on clues, magazine or newspaper articles, and scientific studies. Basically this bookstore is an integral means of investigation and education for young people and adults, it is one of the best virtual libraries that we can visit.

Professionals specialized in IT and linguistics are in charge of writing, editing and publishing the content found in Cervantes Virtual. In addition, this portal has publications on social networks such as Facebook and YouTube, which make the information have a greater reach.

The Library has opened specific areas such as Entretelibros, where a specific amount of works are raffled off among users, and Barter where visitors exchange books or information available to them. These sections have been the result of the importance that Cervantes Virtual gives to the people who are educated through its tools.

This web portal It is distributed by categories or areas, which divide the different themes that Cervantes Virtual offers. The way to access this information is simple, through the search engine any user can write the subject or author they need.

This inquiry tool works through filters, which divide the authors, titles and available subjects in the library. However, there is a way to achieve a more specific result, for example: the author is combined with the type of work or genre. 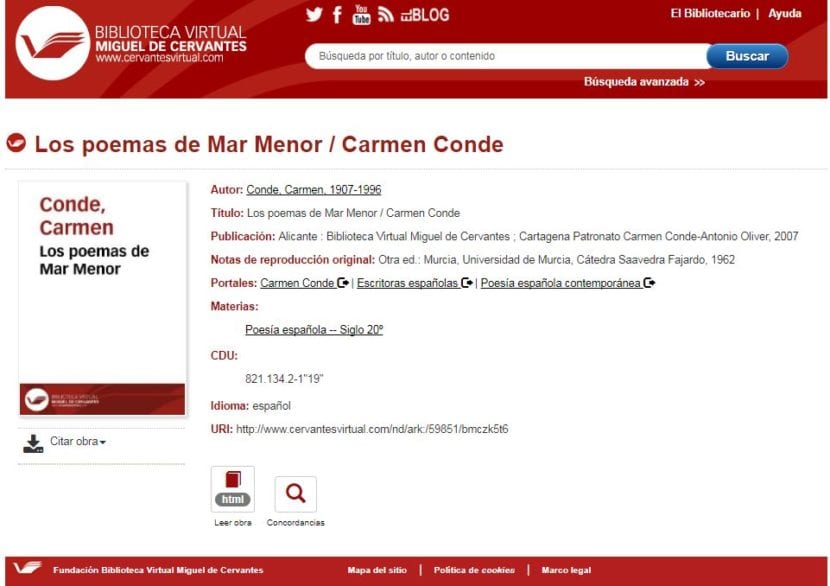 In this section you will find articles about the history of that country and that of other nations that belong to the Hispanic American community. There are stories about heroes, and a section on the Castilian language and research related to it.

The gallery of this section is chaired by Rubio Cremadesun, doctor of the University of Alicante. Within the essence of this portal is a complete gallery about the author Miguel de Cervantes Saavedra, emphasizing his life, writings and contributions to literature

The culture of the American nations is present in all the works that this section offers, not only the Spanish language is the protagonist. Although there are mostly texts written in this language, there are stories in Portuguese and indigenous languages ​​such as Quechua and Mapudungun.

The Miguel de Cervantes Virtual Library has a wide range of works of various origins. Latin American countries such as Argentina, Venezuela, Mexico, Chile and Brazil, as well as institutions such as the Colegio de México, Neruda Letras and the Academia Argentina de Letras have agreements with this portal.

Due to the number of stories in Spanish languages ​​from the African continent, the African Library section of Cervantes Virtual emerges. Josefina Bueno Alonso is the director of this portal, is in charge of approving the works to be published and maintaining its operation.

Here the literature of places like Morocco or Equatorial Guinea is published, for being from countries conquered by Spain. However, there are stories originating from nations that were not taken by that country, however, as they are written in Castilian, Basque, Catalan and Galician they have a place in the library.

In a space of culture and learning like the one that Cervantes Virtual represents, it is necessary to include people with both hearing and visual disabilities. There are audio and video productions aimed at every need; for example, audio books and content explained in sign language.

Within this section of Cervantes Virtual there are categories that can be chosen by visitors. On the Web content is available that teaches visual, contrastive grammar and deaf-mute language, the portal identifies the files according to the network levels in which they can be viewed.

Bookstore for children and teenagers

In the Cervantes Library there is content for all ages and purposes. There are works available of Hispanic and Ibero-American authorship, this space provides educational and pedagogical research through workshops, audiovisual material, magazines, fables and novels.

This space is entirely dedicated to the study of the Spanish language. It highlights qualities such as, for example, that it is a language spoken by approximately five hundred and fifty million people and that it is positioned as the second most talked about in the world and the third most studied, in addition to being the official language of 20 nations.

In this area of ​​Cervantes Virtual the antecedents, texts and works that contributed to the development of this universal language are available. Material is published on spelling, grammar, forms of dialogue such as poetry and rhetoric, as well as the history of Spanish itself. This space demonstrates the broad interest of the library directors that Spanish be disseminated and honored.

In 2012 the Prince of Asturias considered that the Miguel de Cervantes Virtual Library is a stronghold that provides a great contribution to the union of Latin America and Spain. By having the support of consolidated companies and institutions, its development is constant and the dissemination of the culture of Latin America is maintained.

In 2013 the portal was recognized with the Stanford Prize for Innovation in Research Libraries, for the quality of its content and design. In addition, it has a record of more than 225.000 publications and in 2017 it managed to receive more than 10 million unique entries.