Call of Cthulhu —The Call of Cthulhu, in English - is the masterpiece of the American author HP Lovecraft. This story published in 1928 began the so-called "literary cycle of the Cthulhu myths", a series of stories and novels of cosmic horror. It is a set of stories related to ancient extraterrestrial creatures that return or awaken to reconquer the planet.

The later relevance of the figure of Cthulhu within contemporary American culture is undeniable.: books, board games, comics, audiovisual shorts, feature films, video games ... Now, the greatest number of mentions of the terrifying entity has occurred in music, (in songs by world-famous bands such as Metallica or Iron Maiden, for example) .

Summary of Call of Cthulhu

Winter 1926 - 1927. Frances Wayland Thurson, a distinguished citizen of Boston, is informed of the death of his great-uncle, George G. Angell. The latter was an eminent professor of Languages Semitic from Brown University. With respect to the death there are two versions: the official one, due to a cardiac arrest that occurred while the educator was climbing a ramp near the docks.

Instead, the second version (from some witnesses) maintains that a black man pushed the professor down the hill. Being his only heir, Thurson receives all investigative documents and personal belongings from Angell. Among the texts and furnishings, there is a strange box containing rectangular sculpture with hieroglyphic-like inscriptions. 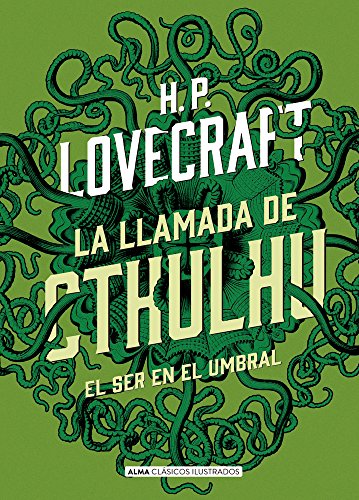 Frances interprets the sculpture as representing a monstrous creature crowned with tentacles and surrounded by somewhat disturbing monolithic architecture. Likewise, in the box there are newspaper clippings; one of those speaks of "the cult of Cthulhu." Two names appear repeatedly alongside the written news: Henry Anthony Wilcox and John Raymond Legrasse.

Wilcox was an eccentric student at the Rhode Island School of Fine Arts who showed the (still fresh) rectangular sculpture to Professor Angell in March 1925. The apprentice argued that the engravings arose from visions he had of a gloomy city of sinister giant monoliths covered in moss. Also, Henry claimed to have heard the message "Cthulhu Fhtagn."

Angell kept a written record of all his encounters with Wilcox. Meanwhile, the student suffered from a strange feverish delirium for several days with subsequent temporary amnesia. In any case, the professor continued investigating; discovered through a survey that Henry's trance coincided with similar visions of other poets and artists.

Additionally, press clippings showed episodes of mass panic and suicides in different parts of the world that occurred simultaneously with Wilcox's hallucinatory period. Similarly, in sanatoriums most patients experienced “hallucinations” featuring a gigantic tentacle-filled monster and an enigmatic city.

Another of Angell's manuscripts dates back 17 years and talk about Legrasse. This was a police inspector involved in the investigation of the mysterious disappearances of women and children in the town of Louisiana. Also, the detective seems to have been an eyewitness to Cthulhu cults (test had a statuette collected in one of these rites).

At the 1908 St. Louis archaeological conference, the detective resorted to various specialists in order to identify the figurine. Only the explorer and anthropologist William Webb claimed to have seen anything similar off the west coast of Greenland. These events took place in the year 1860, when Webb encountered a tribe of brown Eskimos with disgusting behavior.

The "old Castro" had been interrogated by Legrasse's squad in 1907 after being captured in New Orleans during a rite that included human sacrifice. Castro and other prisoners identified the statuette as "the high priest Cthulhu", an interstellar entity waiting to wake up "when the stars are propitious."

Then, the captives translated their song —Identical to that of the Eskimos— with the phrase: "In his home in R'leyh, the dead Cthulhu waits dreaming". After reading the second manuscript, Thurson understands that his great-uncle's death was no accident. For this reason, he begins to fear for his own life, because "he already knows too much."

Afraid, Frances drops Cthulhu cult investigation (He previously met Wilcox and Legrasse). But a journalistic file at a friend's house with a picture of a statuette (similar to the inspector) rekindle their intrigue. The news in question relates the case of a ship - the Emma - rescued at sea with a traumatized survivor, Gustaf Johansen.

Despite the dismayed sailor refusing to provide details of the events, Frances discovers what happened through Johansen's personal diary. Apparently the Emma was attacked by another ship, the Aler. The victims then ran aground on the surface of the “… corpse-city of R'lyeh”. There, Gustaf and his companions witnessed the rebirth of Cthulhu.

Gustaf managed to hit the huge monster in the head when he rammed it with a ship. Since then, no one else is known to have seen the creature. Shortly after being rescued, the sailor was found suspiciously dead. Consequently, Thurson believes that Cthulhu's followers will try to kill him because of everything he knows.

Finally, a resigned Frances accepts the existence of entities from other worlds and of questions that go beyond human understanding. Before saying goodbye, Thurson states that the city and the monster of Cthulhu must have sunk, otherwise, "The world would be screaming in horror". The final reflection of the protagonist reads the following:

Who knows the end? What has arisen now can sink and what has sunk can emerge. The abomination waits and dreams in the depths of the sea and over the doubting human cities destruction floats. The day will come, but I must not and cannot think about it. If I do not survive this manuscript, I beg my executors to be more prudent than daring and to prevent it from falling under other eyes. "

Howard Phillips Lovecraft was born on August 20, 1890, in Providence, Rhode Island, United States. He grew up in a bourgeois family with class tendencies (a very marked prejudice, mainly in his overprotective mother). In accordance, the writer developed an elitist ideology and came to demonstrate his racism on several occasions (evident in his writings).

Although Lovecraft spent most of his life in his hometown, he resided in New York between 1924 and 1927.. In the Big Apple he married the merchant and amateur writer Sonia Greene. But the couple separated two years later and the author returned to Providence. There he died on March 15, 1937, due to cancer in the small intestine.

Between 1898 and 1935, Lovecraft completed more than 60 publications between short stories, stories and novels. However, he did not achieve fame in life. In fact, it was from 1960 on when the American writer began to gain notoriety as a creator of scary stories.

Some of his best known works

Influence of Cthulhu on later literature and art

To date, Lovecraft's work has been translated into more than twenty-five languages ​​and his name is an indisputable reference in cosmic horror fiction. What's more, the Cthulhu myths influenced a good number of followers, who were in charge of "saving" the inheritance of Lovecraft. Among them are August Derleth, Clark Ashton Smith, Robert E. Howard, Fritz Leiber, and Robert Bloch.

Some authors who alluded to Cthulhu

Criticisms of the "lovecraftian formula"

The Cthulhu myths are considered almost a literary movement in itself by many scholars around the world. Nevertheless, Lovecraft has also been the target of criticism for using a compositional style —According to writers such as Jorge Luis Borges or Julio Coltázar, for example— simple and predictable.

Despite this, some academics consider The sand book (1975) by Borges as a tribute to Lovecraft. But other voices believe that the true intention of the Argentine intellectual was to demonstrate the mediocrity of the Lovecraftian formula. For its part, in his essay Notes on the Gothic in the Río de la Plata (1975), Coltázar referred to the author U.S. as follows:

“Lovecraft's method is primary. Before unleashing supernatural or fantastic events, proceeds to slowly raise the curtain on a repeated and monotonous series of ominous landscapes, metaphysical mists, notorious swamps, cave mythologies and creatures with many legs from a diabolical world ”...