In 1870, Johann Ludwig Heinrich Julius Schliemann, a Prussian-born millionaire businessman and amateur archaeologist, led the expedition that discovered the remains of Troy. Thus, the existence of the city described by Homer in The Iliad, one of the most famous epic poems of all time.

The place: Hissarlik, a hill adjoining the Dardanelles Canal (Turkey). The war that culminated in the destruction of the Trojan metropolis took place there. by the Mycenaean Greeks around the year 1250 BC Then, the region was inhabited by Hellenes and Romans in a discontinuous way until the s. XIII AD Since then, everything known about the mythical city came from the letters of Homer.

Despite being one of the illustrious names of ancient literature, historians do not finish reaching a consensus around Homer. The reason: it is impossible to know with certainty whether he lived or not, since —to date— no solid evidence of his existence has been collected. For this reason, many investigations conclude that in reality it was several writers of that time.

Others experts in history they affirm which the immortal epic poems of Homer —The Iliad y The odyssey— are compilations of the ancient Hellenic tradition. In any case, the legend points to a blind poet of the eighth century BC, born in some city of Ancient Greece. (Probable localities are Argos, Athens, Colophon, Smyrna, Ithaca, Chios, Rhodes, or Salamis.)

In the first place, ancient Hellenic tradition and art are esteemed as the root of the manifestations of all the cultures of the Western world. Therefore, Homer's epic poems represent a mystical window that has allowed modern civilization to know aesthetics, arts and the customs of ancient Greece.

In a more specific sense, The Iliad presents war in an idealized way through the contrast of archetypes (Achilles, Hector, Andromaca)... This plot of characters emerged at that time has been perennial in literature until today. In addition, the fact of having been transmitted orally from one generation to another for dozens of centuries, enhances the importance of this epic. 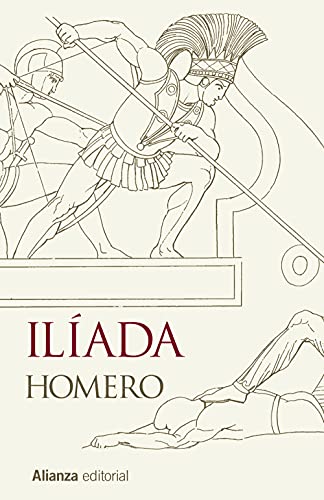 Fragment of the Iliad

"Iris, on the other hand, to Helen with white arms, came a messenger, to one of her similar sisters-in-law, the one that Helicaon, the son of Antenor, had for wife, Laodica, by her countenance the most distinguished of the daughters that Priam had .
He found her in her palace, where she wove a great purple canvas, a double mantle on which she embroidered numerous works of Trojans, tamers of colts, and armored Achaeans with bronze breastplates, those who for her sake were suffering under the palms of the hands of Ares.

The Iliad it does not cover all the events concerning the war between Troy and Greece. It should be remembered that the conflict began after the flight of Helena to go away with Paris, the prince of Troy. That escape outraged Menelaus, who implored the help of his brother Agamemnon —king of Mycenae— to invade the city ruled by King Priam and rescue his wife.

As the war entered its tenth year, the Hellenes stormed the city of Chrysa. In the midst of looting, the Achaean leaders kidnapped two beautiful damsels as prizes. On the one hand, Agamemnon took Chryseis, while Achilles - described as the most handsome, strongest and fastest warrior of all - captured Briseis.

Then Crises —priest of Crisa, father of Criseida and devotee of Apollo— asked in vain for the return of his daughter to the aforementioned monarch. In the face of refusal, the religious implored the help of the sun god, who sent a plague of rats to the Greek camp. Shortly after, the seer Calchas predicted that the epidemic would remain until the maiden in question was released.

After yielding to his slave, Agamemnon decided to take Briseis. In consecuense, Achilles was furious and chose to leave the camp (with the approval of Zeus). Also, the demigod requested the help of his mother, the goddess Tethys. She mediated a ceasefire between the Greeks and the Trojans thanks to the intervention of Zeus. But the pact is soon violated by the Trojans.

The highest god of Olympus appeared in a dream to Agamemnon to rebuke him that he should continue with the invasion of Troy. When the fighting resumed, Paris proposed a duel to Menelaus, he accepted. Meanwhile, Agamemnon and Hector, the Trojan prince in charge of defending the city, agreed that the winner would stay with Helen and declare himself the winner of the entire war.

The fight was watched by Helen and Priam from the city walls until Menelaus wounded Paris. At that moment, Aphrodite intervened to rescue the last one and leave him safe in her room with Helena. In parallel, Zeus summoned the other gods of Olympus with the purpose of ending the confrontations and prevent the destruction of Troy.

The influence of the gods

Hera - wife of Zeus - fervently opposed the truce due to the previous interference of the goddess of love (whom she hates). So, the god of thunder sent athena to break the ceasefire. For this reason, the goddess of wisdom convinced Pandarus to shoot Menelaus with an arrow. Thus hostilities resumed.

On the Hellenic side, an inspired (by Athena) Diomedes killed Pandarus and nearly executed Aeneas, were it not for Aphrodite's interference. However, the deity of passion was also injured, prompting Ares to intrude. Meanwhile, Hector gathered a good number of women in the castle of Troy to calm Athena through prayers.

Héctor berated his brother Paris for abandoning the fight and took him back to the outskirts of the city. Once on the battlefield, Hector requested a duel to which no Greek dared to respond in the first instance. Then Menelaus offered himself, but Agamemnon prevented him from fighting. In the end, Ajax was chosen by lottery to face the Trojan guardian.

After many hours of fighting, there was no winner between Hector and Ajax, in fact, both warriors recognized the skill of their opponent. During the brawl, the Hellenes took the opportunity to build a wall to protect their ships on the beach.

Zeus declared the eventual victory of the Trojans and foretold the death of Patroclus, cousin and close friend of Achilles. Indeed, the Trojans surrounded the Hellenic camp and had a good chance of a definite victory. Despite the deteriorating state of the Greek troops and the fact that the best Hellenic warriors were wounded, Achilles resisted fighting again.

Additionally, Zeus asked the gods not to act in favor of any side. For these reasons, Patroclus asked Achilles for armor to lead the Hellenic army, although the latter warned him not to go too far. However, the former ignored the warning—emboldened by his success in eliminating numerous enemies—and ended up dead at the hands of Hector (aided by Apollo).

The return of Achilles

Hector snatched the armor of Achilles from the corpse of Patroclus. After a few moments, a bloody battle broke out around the naked body of the vanquished because the Achaeans wanted to recover it to give him funeral honors. When Achilles found out what had happened, he was comforted by his mother Thetis., who gave him a new armor because he decided to fight again.

Bust of Helen of Troy

The Trojan soldiers, fearful of the return of Achilles, wanted to take refuge in the walls of their city, but Hector said he was ready to face the demigod. In the meantime, Zeus indicated to the gods that they could intervene in favor of the side they wanted. Indeed, Athena, Hera, Poseidon and Hermes chose the Achaeans, while Aphrodite, Apollo, Ares and Artemis supported the Trojans.

The gods came to fight each other while troops led by a ruthless and invincible Achilles forced the withdrawal of the Trojans. Finally, Hector had to face the demigod after trying to escape from him with the protection of a cloud sent by Apollo. In any case, the die was cast: Hector was executed by the son of Thetis.

Then Achilles tied Hector's body to a chariot by the ankles. and dragged him around the walls of Troy under the horrified gaze of Andromache (the deceased's wife) and Priam. The mistreatment of the corpse lasted for nine days following the celebration of the funerary games after the cremation of Patroclus.

The gods were outraged at Achilles' actions and inspired Priam to raid the Achaean camp. Over there, the Trojan king pleaded for the return of his son's remains for a proper burial; Achilles agreed. Next, demigod and monarch mourned the loss of their loved ones together. The story closes with the tributes made to Hector in Troy.