Origin (2017) is the fifth science fiction novel starring the legendary professor of theological symbology Robert Langdon. This fictional character has made Dan Brown one of the best-selling authors of all time. Only of The Da Vinci Code (2003) more than 80 million copies have been marketed to date.

Such figures aroused the interest of the major Hollywood producers. In fact, all three film adaptations directed by Ron Howard have been starred by a double Oscar winner: Tom Hanks. Yes OK Origin It is not one of those films, its filming could be only a matter of time, because this title it already accumulates almost two million copies sold.

Analysis and summary of Origin

En Origin, Dan Brown contrasts the usual questions of atheistic scientists against the vision of creationism, whose relevance decreases day by day in the XXI century. For this, the American author uses the character of Edmond Kirsch, a former student of Langdon quite brilliant. He has built a fortune thanks to his technological inventions and his bold premonitions.

The last of the discoveries The young tycoon promises to answer two questions that have haunted humans since prehistoric times: "Where we come from? Where are we going?". The answers would be explained at a gala at the Guggenheim Museum in Bilbao and their implications could be crucial for the three largest religions in the world, but ... 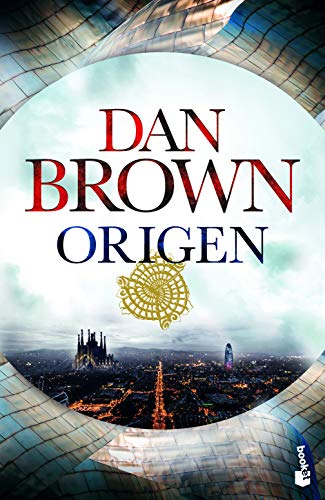 Right before the show starts, chaos breaks out before the crowd of guests and is broadcast live to millions of viewers around the globe. Then the revolutionary revelation is in danger of disappearing forever. Consequently, Langdon and Vidal begin a desperate race to locate the password that grants access to Kirsch's enigma.

The protagonists arrive in Barcelona, ​​where Gaudí's architecture could be key in the young millionaire's theories about science and nature. Apparently, God and science coexist between the flora, the fauna and the engineering of the spirals that dominate the bases and columns of the Cathedral of La Sagrada Familia.

Other locations of the Catalan capital very aptly described by Brown in Origin they are the Guggenheim and the Casa Milà. Nevertheless, It is worth mentioning that the descriptions of Spanish society and government are quite remote from the present. The North American writer presents Spain as a highly religious country and weighed down by the ultra-conservative influence of Francoism.

The artificial intelligence created by Kirsch himself appears as a substantial part of the plot. In the end, the information of the young millionaire is revealed to the world and leads Langdon to reflect on the role of religions today.. The prediction points to a single, pantheistic religion, in harmony with nature and facilitating communion between all human beings.

Despite its spectacular editorial numbers, Brown has been accused of using repetitive patterns in his narratives. Other critics have complained of its alleged historical inaccuracies and flat composition. Such is the case of Jake Kerridge from The Daily Telegraph and Monica Hesse from The Washington Post, staunch detractors of the New Hampshire's work.

However, Brown downplays negative reviews, in fact, he tends to respond with irony "for every critic, I have a thousand happy readers." In this sense, Janet Maslin from The New York Times (2017) invites you to read Origin from the perspective of humor geek. Not surprisingly, Kirsh's Tesla vehicle registration frame ad reads: geeks they will inherit the Earth ”.

This fictional character is an expert in religious symbolism and iconography from Harvard University. He is a middle-aged man in excellent physical condition - due to constant swimming practice - endowed with a very charming voice for women. It also has an almost eidetic memory, very useful when comparing symbols and solving intricate mysteries.

The protagonist always ends up being persecuted and threatened with death by someone, sect or covert organization related to the secret to be revealed. Additionally, in each of the stories the teacher has the valuable support of a unique, attractive and intelligent partner. In Origin, that role corresponds to Ambra Vidal, director of the Guggenheim Museum in Bilbao.

In the novels starring Langdon, the female counterpart has some kind of relationship with the mystery investigated or is the descendant of a personage of historical significance. Origin is no exception, since Vidal is the fiancée of Prince Julian (about to succeed his father on the throne). The latter keeps intimate secrets linked to a priest named Valdespino.

Other historic cities described in the books starring Langdon

Daniel Gerhard Brown came to the world on Monday June 22, 1964 in Exeter, New Hampshire, United States. There he grew up in an environment of strong Anglican beliefs under the tutelage of his parents Richard Brown (math teacher) and Constance (composer of sacred songs). Too In his hometown, the future writer earned his high school degree from Phillips Exeter Academy in 1982.

Then young Daniel began studying music and composition at Amherts College, one of the most prestigious undergraduate institutions in the world. As part of earning his diploma, Brown spent time in Europe (Spain, mainly). After graduating in 1985, he recorded an album of children's music (SynthAnimals) and founded Dalliance, a record company.

Beginnings as a writer

Dan Brown moved to California in the early 1990s in hopes of making a career as a pianist and singer. In parallel, she offered English and Spanish classes at a Beverly Hills high school to support herself. Shortly after, he enrolled in the National Academy of Composers, where he met Blythe Newlon, who was his wife from 1997 to 2019.

As of 1993, he began to write more assiduously; the result of it was Digital fortress (The digital fortress) in 1998, his first novel. Then they appeared Angels and Demons (2001) - Langdon's "debut" - and The conspiracy (2001), prior to Brown's consecrating work: The Da Vinci Code.