LIKE WATER FOR CHOCOLATE It is the most recognized work of the Mexican writer Laura Esquivel. After being published in 1989, it became a classic in international literature. It is a rose novel with notable overtones of magical realism. In 2001, the newspaper El Mundo included the narrative in the "list of the 100 best novels in Spanish of the twentieth century."

The plot is based on the life of Tita, a woman who lives between an impossible love and cooking, and who will go through multiple difficulties to comply with a family tradition. Thanks to this history, Esquivel was the first foreign writer in win the renowned ABBY award, in 1994. Since its release to the present, this work has sold more than 7 million copies and has been translated into more than 30 languages.

Josephite —Or Tita, as everyone knows her— she is the youngest of three sisters. She is the product of the union between María Elena and Juan De la Garza. Ever since he was in the womb of his mother — Mama Elena — he could be heard crying, even on the day of his premature birth in the kitchen of the family ranch. With only two days old, Tita is orphaned of father and becomes raised next to the cook of the house, Nacha.

From a very young age, the environment in which it grows makes you love culinary art, which he perfects under the teaching of Nacha. During her teens, Tita is invited to a celebration; there meet Pedro, both they fall in love at first sight. Shortly after - motivated by his deep feelings - this young man goes to the De la Garza family Ranch, determined to ask Mamá Elena for the hand of his beloved.

Peter's request is rejected, as, according to the customs of the time, Tita —For being the youngest daughter— she must remain single to care for her mother in her old age. In counterproposal, Mamá Elena offers him the opportunity to marry his first-born: Rosaura. Unexpectedly, the young man accepts the commitment, with the intention of being close to the love of his life.

One day before the marriage, Nacha dies. In consecuense, Tita must be the new cook. The wedding takes place and Tita is sunk in deep sadness, so through every plate she transmits their more remote feelings.

From there a series of events take place that, although many are to be expected, will have twists and turns that will surprise more than one avid reader. The passion, the pain, the madness and ingrained customs of the time, they are some of the ingredients that will bring this story to life based on a "forbidden" love. 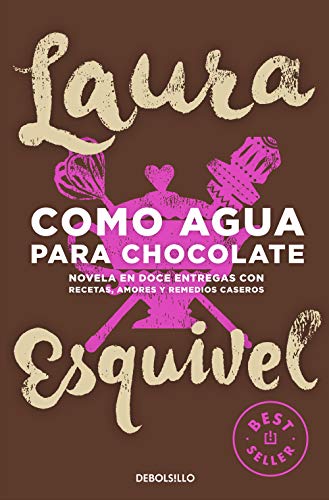 Like water for Chocolate...
No ratings
9,45€
View deals See features

LIKE WATER FOR CHOCOLATE it is pink novel with a marked magical realism. It has 272 pages and it is divided into 12 chapters. It is set in Mexican territory, specifically in the city of Piedras Negras de Coahuila. The story begins in 1893 and covers 41 years; during that period the Mexican Revolution (1910-1917) situation that is reflected in the plot.

Among the peculiarities of the work, the author represented the chapters with the months of the year and accompanied each one with the name of a typical Mexican dish. At the beginning of each section, the ingredients are exposed, and while the narrative unfolds, the recipe is described in detail. The novel is related by a third person narrator, whose name will be revealed at the end of this.

She is the protagonist and main axis of the novel, the youngest daughter of the De la Garza family and a exceptional cook. She has had the sad fate of not being able to be with the love of her life, even if they live in the same home. Being repressed by her mother, she will seek refuge in her other passion, cooking. In a magical way, he will convey his emotions through his exquisite recipes.

Is the mother of Rosaura, Gertrudis and Tita. It is a woman of strong character, authoritarian and strict. After being widowed, she must be the head of the family and will have to take care of the ranch and all her daughters.

He is the co-star of the novel; despite being hopelessly in love with Tita, He decided to marry Rosaura in order to stay close to his love. Regardless of time and circumstances, his feelings for Tita will remain intact.

She is the cook of the racho of the De la Garza family, and who, in addition, plays an important role in the life of the protagonist.

She is the first daughter of the De la Garza couple, a young woman of principles and customs, who she must marry Pedro by order of her mother.

Throughout the story other characters interact who will end up giving a particular touch to the plot. Among them we can highlight: Gertrudis (Tita's sister), Chencha (Tita's maid and friend) and John (family doctor).

The writer was married to director Alfonso Arau from 1975 to 1995, this was the Manager perform the film adaptation of the novel. Laura herself was in charge of writing the script for the film, with the cooperation of her husband. The film was a resounding success since its premiere in 1992, with a 100% Mexican production, awarded with 10 Ariel awards and more than 30 translations.

The film remained among the highest grossing Mexican cinema for decades. She was nominated for important awards, such as: Goya and Golden Globe Awards in 1993. But, not everything was rosy: in 1995 the author sued her ex-husband for making her sign a clause (in English) in the divorce document. where he gave up the rights to the novel. Ultimately, the Mexican writer won the trial.

Some biographical data of the author Laura Esquivel

The writer Laura Beatriz Esquivel Valdés was born Cuauhtémoc (Mexico), on Saturday September 30, 1950. She is the third daughter of the marriage between Josefa Valdés and the telegrapher Julio Esquivel. In 1968, she graduated with a degree in Early Childhood EducationAlso studied Theater and Dramatic Creation in the children's category at CADAC (Mexico City).

Since 1977, she has been a teacher in various workshops theater, script consultancy and writing lab, in different Mexican and Spanish cities. For 10 years (1970-1980) he wrote various scripts for Mexican television programs for children. In 1985, he made his debut in the cinematographic area with the creation of the script for the film: Chido Guán, The Golden Tacos.

Since 2007 he ventured into politics; a year later she was General Director of Culture in Coyoacán until 2011. She is part of the Morena party (National Regeneration Movement), with the which was elected in 2015 as a federal deputy of the Congress of the Union in Mexico.

In 1989, he presented his first novel, entitled LIKE WATER FOR CHOCOLATE. Following the success of this book, the writer produced nine additional narratives from 1995 to 2017, in which the following stand out: As fast as desire (2001) Malinche (2005) Tita's diary (2016) y My black past (2017); these last two complete the trilogy Like water for Chocolate.