Frankenstein's mother is a historical novel elaborated by Almudena Grandes and is the fifth installment of the series Episodes of an Endless War. This title presents a narrative set in postwar Spain. Likewise, the theme of the book shows part of the psychiatric consequences caused by the Civil War and the Franco regime.

For this, the author presents hundreds of characters - some fictitious, others real - in the midst of the historical situation of that time. There, a plot unfolds around the last years of the life of Aurora Rodríguez Carballeira, who appears confined in an asylum. In addition, the book exposes the trustworthy experiences of this Spanish woman who became famous in the 30s for having murdered her daughter.

Context of the work

Grandes met with the story of Aurora Rodríguez Carballeira after reading The manuscript found in Ciempozuelos (1989), by Guillermo Rendueles. Intrigued by this character, the Madrid writer continued investigating in order to document in detail about the case. For this reason, throughout the plot several real events are presented, which give the story greater impact.

The development places the reader in the Ciempozuelos Asylum (near Madrid), during the 1950s. The text covers 560 pages loaded with history that describe the vicissitudes derived from so many armed conflicts. In this way, a plot appears around 3 characters: Aurora, María and German, who alternate the first person in the narrative. 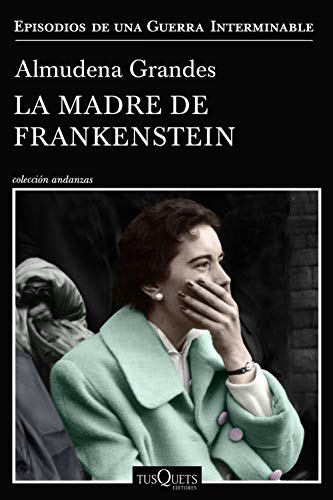 In 1954, the psychiatrist German Velásquez returns to Spain to work in the women's asylum in Ciempozuelos, after residing 15 years in Switzerland. Due to the application of the new treatment with chlorpromazine - a neuroleptic used to lessen the effects of schizophrenia - it is severely criticized within the psychiatric center. However, the results will surprise everyone.

German he soon discovers that one of his patients is Aurora Rodríguez Carballeira, a woman who has generated curiosity since childhood. As a child, he remembers hearing the confession she made to her father — Dr. Velásquez — about him. murder of his daughter. Thus, the psychiatrist enters the case to find the best treatment and try to make his last days better.

Aurora Rodríguez Carballeira is an extremely lonely woman, only visited by María Castejón, a nurse who has always lived there (she is the gardener's granddaughter). María feels a great appreciation for Aurora, because I taught her to read and write. In addition, every day she enjoys spending time in her room, where she is dedicated to reading to him, since Rodríguez is going blind.

Aurora She has the profile of a very intelligent woman, a defender of eugenics and women's rights. Her suffers from a disease that causes hallucinations, persecutory manias and delusions of grandeur. The story tells of his last two years of life, after more than two decades in prison due to the crime committed against his daughter, which he never regretted.

Determined to create the "perfect woman of the future", Aurora set out to have a daughter and raise her with her main ideals. The lady called that girl: Hildegart Rodríguez Carballeira - for her it was a scientific project. Under that criterion, raised a child prodigy, with great success in principle. However, the young woman's desire for freedom and wanting to get away from her mother led to un tragic ending.

Hildegard He was extremely intelligent, with only 3 years he already knew how to read and write. It was the youngest lawyer graduated in Spain, while studying two additional careers: Medicine and Philosophy and Letters. Additionally, he was a political activist at a young age, therefore, he had a very promising future ... Truncated when she was murdered by her mother, when she was only 18 years old.

En Frankenstein's mother, the author seeks to reflect the reality of the women of that time. For this reason, Grandes uses the Ciempozuelos mental sanatorium for women as the setting. Since this asylum was not only intended for women with mental problems, there were also women imprisoned for wanting to be independent or for living their sexuality freely.

Upon reaching Ciempozuelos, German was attracted to María, a repressed and frustrated young woman. She, for her part, rejects him, something that puzzles German, who will have to discover why she is so lonely and mysterious. A forbidden love due to the circumstances of a country where double standards reign, full of illogical rules and injustices everywhere.

The narrative includes several true characters of the time, such as, for example, Antonio Vallejo Nájera and Juan José López Ibor. Antonio was the director of Ciempozuelos, a man who believed in eugenics and who believed that all Marxists should be eliminated. Accordingly, he promoted shooting adults with that ideology and delivering their children to families of the National Movement.

For its part, López Ibor - despite not having friendship with Vallejo - agreed that he mistreated the so-called "reds" and homosexuals. This was a psychiatrist in times of Franco, who practiced electroshock sessions and lobotomies. These procedures were only applied to men, since women could not have sexual independence.

Other members of the story

In the plot appear secondary characters (fictional) that help to complement the story. Among them, Father Armenteros and the nuns Belén and Anselma, who represent the religious entity within the asylum. In addition, Eduardo Méndez - homosexual psychiatrist - who was a victim in his youth of López Ibor's practices and becomes a good friend of German and María.

Almudena Grandes Hernández was born in Madrid on May 7, 1960. He completed his professional studies at the Complutense University of Madrid, where he graduated in Geography and History. His first job was in a publishing house; There his main task was to write the footnotes of the photographs in the textbooks. This occupation helped her to become familiar with writing.

Quote by the writer Almudena Grandes.

His first book, The ages of Lulu (1989), was a great success: translated into more than 20 languages, winner of the XI La Sonrisa Vertical Award and adapted to the cinema. Since then, the writer has made several novels that have obtained good editorial numbers plus critical acclaim. In fact, the ones mentioned below have also been taken to the cinema:

In 2010, Grandes published Agnes and joy, the first installment of the series Episodes of an endless war. With this book, the writer won the Elena Poniatowska Ibero-American Novel Prize (2011), among other awards. So far there are five works that make up the saga; the fourth: Dr. García's patients, received the 2018 National Narrative Award.