Placing "Carmen Conde poems" in the web search engines is to find a rich and wide universe of letters. This poetess On January 28, 1978, she became the first woman to enter the RAE during the —by then— 173 years of the institution's existence. Her induction was not without controversy due to her and her husband's connection to the Falangists of the Francisco Franco regime. But it is quite biased to value academics solely for their political affiliations. In addition, he is recognized as one of the most prominent personalities of the so-called 27 Generation.

Carmen Count Born in Cartagena on August 15, 1907, she was a prolific writer and also stood out as a playwright, prose writer and teacher. From a very young age she was very attached to culture and letters, therefore, some specialists consider that the publication of "only" about 300 copies of her work is insufficient. Regarding his 100th birthday, the newspaper El País wrote a tribute article where his poetry is defined as "lyrical, fresh, sensual."

It is considered that his main influence was the Nobel Prize winner Juan Ramón Jiménez. Likewise, in correspondence that he maintained for almost seven decades with the poet Ernestina de Champourcín, his admiration for authors such as Gabriel Miró, Santa Teresa and Fray Luis de León is evident.

His first job was in 1923 as a room assistant at the Sociedad Española de Construcción Naval Bazán. A year later, she became a press contributor. He studied Teaching at the Normal School of Murcia, there he met the poet Antonio Oliver, with whom he formalized relationships in 1927 and married in 1931.

During this period he also published his first books of poems: Curb (1929) whose prose theme is the light-filled environment of the Mediterranean; Y Rejoice (1934), written during her pregnancy, where she shows a greater depth to reflect existential themes.

Sadly, their only daughter was stillborn in 1933. The tragedy marked his work until he met Amanda Junqueras, with whom he had a furtive love that inspired some of his most sensual works, loaded with eroticism and metaphors related to darkness and shadows (alluding to the prohibited), such as Craving for grace (1945) y Woman without Eden (1947), among others.

After the Spanish Civil War (1936-1939), Count and husband were founding members of the Popular University of Cartagena and from the Rubén Darío Weekly Archive at the University of Madrid. Difficult times passed, because due to Oliver's initial adherence to The Republic, the couple was forced to remain apart for long periods.

In the following years Carmen Conde worked as a professor of Spanish literature at the Institute of European Studies and at the University of Valencia (in Alicante). This is also a time characterized by its compositional versatility, evident in poems such as "In No Man's Land« (1960) dominated by a feeling of loneliness and enlistment.

Likewise, his work On this side of eternity (1970), declares its rebellious position in the face of social injustices. In Corrosion (1975), reflects on life, death and pain (impacted by her trip to New York and the death of her husband). Topics that are being renewed in Time is a slow river of fires (1978) y The dark night of the body.

Among the most outstanding awards given to Carmen Conde are the Elisenda Montcada Prize (1953) for The dark roots, the National Poetry Prize (1967) and the Seville Athenaeum Prize (1980) with I am the mother. In 1978 she made history by being the first woman inducted into the Royal Academy of the Spanish Language.

In the early 1980s the writer manifested the first symptoms of Alzheimer's. However, illness did not prevent him from publishing his latest collection of poems, Beautiful days in China (1987), where he shows his admiration for the culture of the Asian giant, after having visited it. He died on January 8, 1996 in Majadahonda, at the age of 88.

Features of his work and some of his most representative poems

The lyrical use of the self in Carmen Conde's poems is inaccurate and sometimes abstract. In the same way, the gender of the characters hides them to circumvent the moral precepts through the invocation of the soul and the use of indeterminate pronouns.

The writer almost always identifies the loved one with a landscape. The bodily elements are frequent, reflected through the humanization of nature. The desire for the forbidden and silence are common through metaphors about the night and the unknown emptiness.

His poetry is free, lacking in rhymes, but not so rhythmic. His language is natural, and shows a deep command of the language, with deep metaphors that engage readers and invite them to read and reread each poem, verse by verse. The poems of Carmen Conde, due to their depth and content, should be included among the best poetry books in history.

Carmen Conde's poetry is universal, the international day of poetry, March 21, his poems are read in many parts of the world. Below you can see five of the most representative poems within the vast lyrical composition of Carmen Conde.

without the air, or hear you, or know what you smell.
With a gesture you spend the night of your body
and I make you transparent: I am you for life.

Your eyes are not over; the others are the blind.
They do not join me, nobody knows that it is yours
this mortal absence that falls asleep in my mouth,
when the voice cries out in weeping deserts.

Tender laurels sprout on the foreheads of others,
and love consoles itself by lavishing its soul.
Everything is light and faint where children are born,
and the earth is of flower and in the flower there is a sky.

Only you and me (a woman in the background
of that dull glass that is a hot bell),
we are considering that life ... life
it can be love, when love intoxicates;
it is undoubtedly suffering, when one is happy;
it is, surely, the light, because we have eyes.

But laugh, sing, shudder free
of wishing and being much more than life ...?
No. I know. Everything is something that I knew
and therefore, for you, I remain in the World ».

«Because being you the same, you are different

and distant from all who look

that rose of light that you always pour

from your sky to your sea, field that I love.

My field, of love I never confess;

of a modest and modest love,

in my body next to yours eternal.

I have come to love you, to tell me

your words of the sea and palm trees;

your canvas mills that you brackish

They quench my thirst for so long.

I abandon myself in your sea, I leave myself yours

How to give yourself you have to do it to be you.

If I closed my eyes it would remain

made a being and a voice: drowned alive.

Have I come, and I left; I'll be gone tomorrow

and I will come like today ...? What other creature

will come back for you, to stay

or escape in your light towards the never? ». 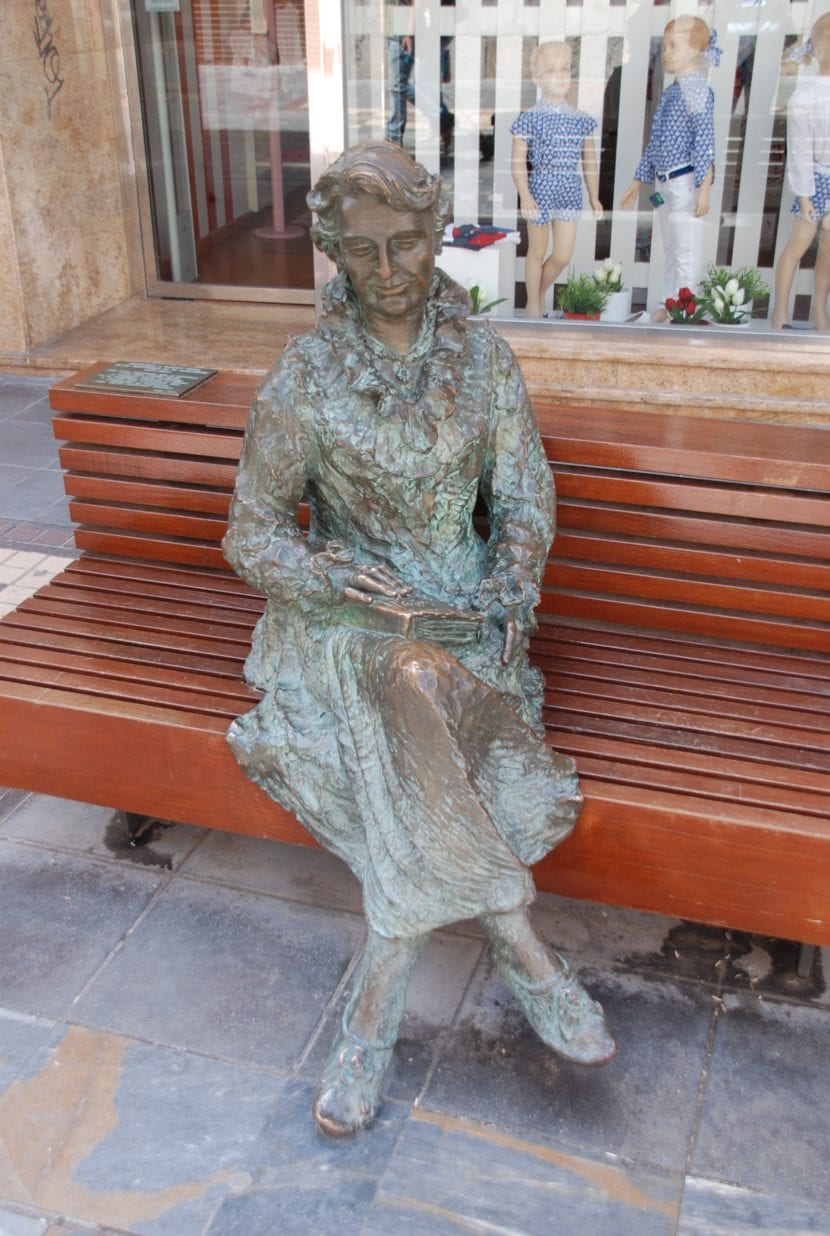 Statue in honor of Carmen Conde.

«Naked and attached to your nakedness.

in the flat water of your chest.

My shoulders spread under your shoulders.

And you, floating in my nakedness.

I will raise my arms and hold your air.

You can descend my dream

because the sky will rest on my forehead.

Tributaries of your rivers will be my rivers.

We will sail together, you will be my sail,

and I will take you through hidden seas.

What a supreme effusion of geographies!

Your hands on my hands.

Your eyes, birds of my tree,

«I need to have a meek soul

please him with spikes the smoothness

of her dazzled skin in meekness.

It is necessary to tame her, that her fever

I did not tremble in the blood for a minute.

Let the fires of oil flood it

thicker with horror, and that it resists.

Oh, my soft and subdued soul,

sweet beast enclosing itself in my body!

Lightning, screaming, freezing, and even people

urging her out. And she, dark.

I ask you, love, to allow me

To give you (and free me from this fury),

"The universe has eyes"

"They look at us;

they see us, they are seeing us, they look at us

multiple invisible eyes that we know of old,

from all corners of the world. We feel them

And sometimes they suffocate us.

We would like to scream, we scream when the nails

Of the endless lookouts haunt and exhaust you.

They fulfill their mission of looking at us and we see each other;

but we would like to put our fingers between her eyelids.

For them to see,

so that we could see face to face,

lashes against lashes, taking your breath away

dense with worries, fears and anxieties,

the absolute vision that we all pursue.

Ah, if we surprised you, concrete,

coinciding on the fluid surface of the mirror!

They will look at us forever

And we will walk together, without finding ourselves as mortals

around the same creature intact

that rejects the eyes it has created.

Why, if we are not going to see it, even if it blinds us,

did those and these innumerable eyes? ».

I wait for you next to the night.

they fan my current.

Look how pure my ponds are.