Wall of the berlin wall

Sofia's suspicion (2019) is a historical fiction novel created by the Spanish author Paloma Sánchez-Garnica. The narrative moves between two quite relevant periods of Spain and Germany during the second half of the XNUMXth century. On the one hand: the late Francoism in Madrid; on the other: the years before the fall of the Berlin Wall in the German capital.

The Madrid writer takes advantage of this context to relate what was the role of women after the Spanish Civil War. In parallel, the action describes an interesting plot of spies around the concrete wall that separated Berlin families from 1961 to 1989. Additionally, there is room for an exciting and intense love story that involves the protagonist.

Madrid, 1968; Franco's dictatorship is in its final years. There, Daniel and Sofía Sandoval form a marriage with a calm existence. On the one hand, he is the only child of the lawyer Romualdo Sandoval, director of a law firm famous for its affinity for the "Generalissimo." This circumstance generates in the husband certain complexes derived from the comparison with his father.

For its part, Sofia is a very intelligent woman, with great capacity for science (in addition, his father is a scientist). However, she —Like the vast majority of women of that time— she does not own her own decisions. In fact, any family or private plan is totally dependent on the approval of your conservative-minded husband.

The daily routine of Sofia and Daniel along with his two daughters is from a wealthy family without many worries. However, deep down, she no this completely satisfied with his life as a couple. What's more, this woman put aside his university training to devote himself exclusively to housework and to pleasing his spouse.

Everything changes radically when daniel receives a letter from unknown sender with disturbing information about his dear mother, Tabernacle. The letter points out that she is not his real mother.... If he wishes to know the truth, he must travel to Paris immediately, that same night. Also, a key character appears for the subsequent events: Klaus. 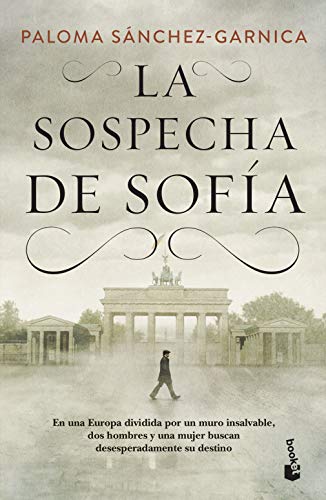 Before leaving, Daniel He asks his father about the matter, but the latter recommends that he leave the past alone. However, Romualdo's warning only increases the uncertainty of his heir, who it doesn't take long to disappear. In that way, Sofia begins a fast-paced search across half of Europe to find out where and especially why your husband is gone.

In Paris they are unleashed the manifestations of called May French - probably - the largest general strike ever seen in Western Europe. At that point, the book describes in detail the intrahistory of the entire socio-political framework of the time, not only in Gallic territory, mainly in Berlin divided by the wall and in late-Franco Madrid.

The conspiratorial elements due to the involvement of the KGB and the Stasi add to the suspense of an already complicated network. Similarly, the intelligence services at the service of the Franco regime have a substantial participation. All of this is perfectly complemented by Paloma Sánchez-Garnica's masterful recreation of the historical settings.

One of the enormous merits of the Spanish author lies in the construction of her characters. It's more, the representation of the protagonists has the psychological depth of a real person. Consequently, the reader perceives as trustworthy the emotions of Sofia and Daniel, as well as the suffering, fears, virtues and defects of all the members of the story.

In the end, the (logical) intrigue and suspense of spy conspiracies coexist seamlessly with the moving evolution of the love of the Sandoval couple. By way of closing, Sofia's suspicion leaves a universal message: if a person lives oppressed under a totalitarian regime (Daniel in Franco, Klaus in East Germany) he will not be able to live with true well-being.

How the story of Sofia was born

Sánchez-Garnica told the newspaper ABC in 2019 who witnessed in first person of the entire transition process towards democracy become after Franco's death. In this regard, she stated: “We did not wake up the next day as a democratic country, it took a lot of effort and a lot of bobbin lace. In the end, with the Constitution, we reached an agreement to move forward ”.

Similarly, the Spanish writer was in Berlin on the eve of the demolition of the so-called Antifaschistischer Schutzwall —Antifascist Protection Wall— by the GDR. Likewise, in the German capital he witnessed the opposing universes on both sides of the most symbolic construction of the Cold War, the Schandmauer or Wall of Shame, as it was baptized on the western side.

After the launch of Sofia's suspicion, the Iberian writer stated that she was inspired by various national and foreign authors at the time of writing. Among the texts referred to are Colonel Chabert (1832) by Honoré de Balzac, Martin Guerre's wife (1941) by Janet Lewis and Berta Island (2017) of Javier Marías.

Certainly, Sánchez-Garnica managed to mix some stylistic characteristics of the three mentioned novels. These features are appreciable for its third-person account that naturally combines past and present events. The result is a book more than six hundred pages with the power to hook to the readers from the first line to the last.

About the author, Paloma Sánchez-Garnica

Before formally becoming a writer, Paloma Sánchez-Garnica (Madrid, 1962) practiced as a lawyer, as she has a degree in Law, Geography and History. Su literary debut came in 2006 with The great arcanum. Then, in 2009 it began to be recognized in his country through the successful publication of The east breeze.

Then they appeared The soul of the stones (2010), The three wounds (2012) y The sonata of silence (2014). The definitive consecration came with the launch of My memory is stronger than your forgetfulnessWinner of the 2016 Fernando Lara Novel Award. Therefore, the author tried to prepare thoroughly to keep the bar high in her next book: Sofia's suspicion.