I can't hear the children play

On May 6, 2021, the launch of I can't hear the children play, the fourth novel by Mónica Rouanet. It is a psychological thriller with great power of shock from the very title, which suggests a discouraging and shocking context. The protagonist is Alba, 17 years old, who is confined in a psychiatric center due to aggravated post-traumatic stress.

There, she is able to see and hear children that no one else can see. Faced with the perplexing situation, the girl's reaction is to find out what happened a few years ago in the hospital. Although, given his state of consciousness, delving into disturbing events may not be the best decision. For this reason, hope becomes the engine to reveal each mystery and overcome their own traumas.

Analysis of I can't hear the children play

Comparison with other novels by the author

The plot of this psychological thriller is quite different from Rounet's previous two, dominated by intricate family intrigues. At the same time, I can't hear the children play It has an obvious similarity with other books by the Spanish writer: a female protagonist. In any case, all its titles quickly catch the reader through a narrative technique distinguished by its descriptive depth, authenticity and surprises.

Of course, the characters are also very well designedTherefore, they are capable of generating a sense of identification and compassion in readers. That emotional connection facilitates a quick reading of the text —despite the density of many of his paintings—, which can become addictive. In parallel, the richness of details leads to the development of longer chapters (compared to other Rouanet novels). 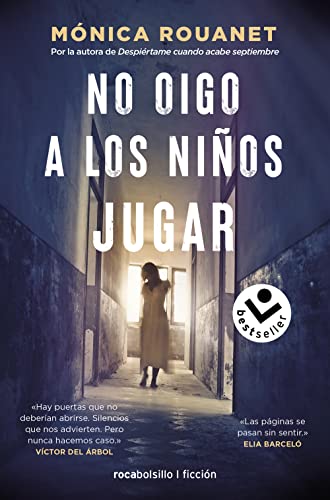 One of Rouanet's narrative characteristics in this novel is the explicit style to recount several of the crudest events. However, said "graphic roughness" does not detract one iota from the hope essential to advance in the midst of sequences with many disconcerting moments. That contrast between sadness and optimism is vital to the final moral of a story with equal shades of darkness and light.

Finally, the development of I can't hear the children play breaks with the traditional lines of the Police genre. Although there are intrigues, crimes, surprising twists and mystery —as in all crime novels—, the common thread does not revolve around a typical police investigation. In fact, the writer from Alicante took the risk in this book of not following to the letter the successful outline of her previous thrillers. That power to reinvent herself is her great merit.

Summary of I can't hear the children play

The action takes place in a sanatorium for children under 18 years of age. Over there, Alma, a 17-year-old girl affected by severe post-traumatic stress, is taken by her grandfather to be hospitalized temporarily. The cause of such a picture was an accident that cost the lives of her father and Lucía, his sister. Consequently, the girl was left with a persistent feeling of guilt in her psyche that she and her old man are unable to deal with.

In the psychiatric hospital each patient has very marked peculiarities. Among all of them, the protagonist creates a special bond with two twelve-year-old boys that only she can see. Later, the girl meets Diego, who can also see the children and seems to have the ability to move between two dimensions. Thus, the reader is enveloped in a feeling of confusion that is accentuated by the sufferings of the characters.

The building where the events take place is one that "is scarier on the inside than on the outside." The façade of the building transmits a certain heaviness due to its concrete walls and faded friezes. with pastel colors. After being admitted, Alma learns about the past of the compound: a few years ago it had been a hospital for children with hearing problems.

The protagonist wants to be cured of her affliction, but day by day the doubts regarding her decision to be hospitalized grow progressively. To make matters worse, the last two floors of the building have been closed and apparently there are things that only she can hear.. Likewise, many of the people in the place claim to have heard "the nun with the bell", but without anyone having seen her.

Mysteries are piling up

Alma's days are filled with a tense calm as she silently contemplates the long corridors of the building. Similarly, she takes a walk from time to time through a well-kept garden, although she does not stop perceiving a gloomy and languid air. Those moments of uncertainty are interspersed by the dedication shown by the nurses at the clinic and the admirable doctor Castro.

The dedication of the caregivers is a halo of hope in the minds of some children who feel that they are being watched all the time. In addition, disturbing events keep showing up in the form of dead birds, abandoned rooms, old toys and shadows of children. In this way, the line between reality and hallucination seems to blur... especially when the protagonist walks through the closed area of ​​the hospital.

About the author, Mónica Rouanet

Mónica Rouanet is a writer from Alicante, but since childhood she moved with her family to Madrid. In the Spanish capital He studied Philosophy and Letters and a specialization in Pedagogy from the Comillas Pontifical University. Later, studied Psychology at the National University of Education. After completing his postgraduate degree, he has dedicated himself to caring for people in vulnerable situations for the last twenty years.

Rouanet's literary career began with the publishing house La fea bourgeoisie with the publication of The path of the fireflies En His debut feature, La Literata Ibérica, demonstrated his ability to put together complicated and exciting plots led by well-constructed characters. in different temporal planes. In 2015, the Iberian writer moved to Roca Editorial, a firm with which she has published the following four titles of hers: